Benefits of Elderberry for Symptoms of Common Cold in Air Travelers

ND, DHANP, FABNO
In this placebo-controlled study, elderberry extract reduced symptoms and duration of common colds related to air travel, but the quality of the study raises some concerns.

This is part of the October 2016 Special Issue on Immunology. Read the full issue or download it. 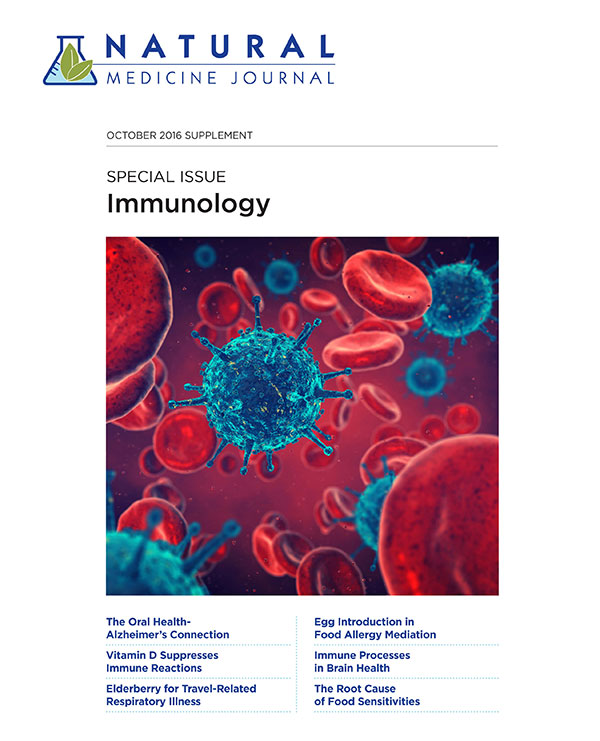 To determine whether a standardized membrane-filtered elderberry extract (BerryPharma; Iprona, Italy) is effective in preventing symptoms of common colds during long-haul air travel

All participants were economy class air travelers on at least a 7-hour flight with less than a 12-hour stopover and a minimum of a 4-day stay at their destinations. Three hundred and twenty five adults were enrolled and 312 completed the trial. All participants were 18 years or older in good general health, with an average age of 50; 66% were female. Fifty-four percent had received a vaccine more than 10 days before starting the trial; 96% were nonsmokers; 70% had travel time of more than 16 hours; 82% traveled for holiday. Subjects were recruited from the Gold Coast region of Australia and traveled between April 2013 and December 2014.

Study intervention was elderberry extract, each capsule containing 300 mg of elderberry extract [22% polyphenols (ie, quercetin and its glycosides, rutin); 15% anthocyanins (ie, cyanidin and pelargonidin glycosides) and 150 mg of rice flour]. Placebo contained matched excipients and was identical in appearance.
Participants were randomized into 2 groups, to receive either study medication or placebo, beginning with a priming dose of 2 capsules per day 10 days before air travel (baseline; –10 days), followed by an overseas dose of 3 capsules per day taken before departure (–2 days) until 4 or 5 days after arrival (+4/5 days). A daily diary was kept throughout the study period (from day –10 to days +4/5) to record cold symptoms as well as to note additional health issues and additional medications.

… we will need to wait for better high-quality, well-powered studies to find out whether these herbal extracts meet the standards of scientific proof for prophylaxis and treatment of respiratory illness associated with air travel.

Participants completed a number of surveys during the study period—at baseline (–10 days), before travel (–2 days), and after travel (+4/5 days). The Wisconsin Upper Respiratory Symptom Survey (WURSS-21) was used to assess respiratory symptom-related quality of life, the SF-12 assessed general quality of life, and the Perceived Stress Scale (PSS) was used to measure participants’ perception of stress. Cold diagnosis was assessed by measuring the Jackson Score.

Black elderberry (Sambucus nigra) extract has been shown, in previous clinical studies (including those discussed below), to lessen duration and symptoms of both influenza and the common cold. This trial aimed to discover whether elderberry was effective at preventing the common cold and reducing its duration and symptoms, specifically in the context of air travel.
Black elderberry extract has been shown to inhibit human influenza A (H1N1) infection in vitro by binding to H1N1 virions, thereby blocking the ability of the viruses to infect host cells.1 The same study showed elderberry to be effective against 10 strains of influenza virus and compared its effectiveness favorably to the known anti-influenza activities of oseltamivir (Tamiflu) and amantadine.
In a double-blind, placebo-controlled, randomized study, black elderberry extract (Sambucol) reduced the duration of flu symptoms by 3 to 4 days. In addition, during the convalescent phase participants’ blood serum showed a higher antibody level to influenza virus in the Sambucol group than in the control group.2
Another study assessed the effect of Sambucol products on the healthy immune system— namely, their effects on cytokine production. The production of inflammatory cytokines was tested using blood-derived monocytes from 12 healthy human donors. Adherent monocytes were separated from peripheral blood lymphocytes and incubated with different Sambucol preparations (ie, Sambucol Elderberry Extract, Sambucol Black Elderberry Syrup, Sambucol Immune System, and Sambucol for Kids). Production of inflammatory cytokines [interleukin (IL)-1 beta, tumor necrosis factor (TNF)-alpha, IL-6, IL-8] was significantly increased, mostly by the Sambucol Black Elderberry Extract (from 2-fold to 45-fold), as compared to lipopolysaccharide (LPS), a known monocyte activator (from 3.6-fold to 10.7-fold). The most striking increase was noted in TNF-alpha production (44.9-fold). The authors concluded that, in addition to its antiviral properties, Sambucol Elderberry Extract and its formulations activate the healthy immune system by increasing inflammatory cytokine production.3
Black elderberries are dark violet in color owing to their anthocyanins, which are considered to be the active constituent of the fruit. The elimination of plasma anthocyanins appears to follow first-order kinetics, and most anthocyanin compounds are excreted in urine within 4 to 5 hours after ingestion. A study by Frank et al found the elimination half-life of total anthocyanins was slightly lower following consumption of 278 mg (1.85 h) than after the consumption of 1,852 mg (2.57 h). The urinary excretion rate of intact anthocyanins was fast and appeared to be monoexponential with high variability. The low dose-normalized area under the concentration curve (AUC) and the fraction of orally administered anthocyanins recovered unchanged in urine indicate a low bioavailability of these compounds.4
The product used in the current study under review consisted of 600-900 mg of elderberry extract containing 90-135 mg of anthocyanins daily. This dose was far lower than the doses used in the Zakay-Rones randomized study of Sambucol, which used an extract containing approximately 1,900 mg anthocyanins. Since most of the active ingredients are excreted within 5 hours, it may be necessary to dose elderberry 4 or 5 times daily to even begin to obtain a 24-hour anti-influenza action from the plant. Whether this applies to the rhinoviruses and other viruses causing the common cold is unknown.
In both the elderberry and placebo groups, 50% of the subjects who developed cold symptoms used co-medication to relieve symptoms. This presents a significant confounding factor in interpreting the results. As a group, the participants with cold symptoms used 25 different conventional medications and 1 natural medicine. Some participants took 1 medication, others took up to 4.
The authors of this study previously published a similar trial attempting to show Echinacea root extract to be effective in reducing respiratory symptom score and the number of participants affected by respiratory disease symptoms. The results failed to achieve significance.5 Similarly, in the present study, many of the outcome measures did not reach significance. Yet in both of these publications the authors repeatedly stretch the limits of statistical significance by reporting “trends” and “marginal” results rather than adhering to the accepted standard of a P value < 0.05, giving the impression that their studies are more conclusive than they actually are.
Given the fact that I have lived in Hawaii for over 30 years and travel frequently, every flight I take (other than to the other Hawaiian islands) is at least 4.5 hours in duration (depending on wind conditions). Whether I travel to the West Coast, East Coast, or Europe, I find the conditions uncomfortable and stressful and I routinely take an herbal formula containing echinacea and elderberry to shore up my immune system. It seems to work. However, we will need to wait for better high-quality, well-powered studies to find out whether these herbal extracts meet the standards of scientific proof for prophylaxis and treatment of respiratory illness associated with air travel. Meanwhile, I find the risk/benefit balance tips firmly in the direction of flu prophylaxis with elderberry extracts.

Michael Traub, ND, DHANP, FABNO, is a leading expert in dermatology. He graduated from National University of Naturopathic Medicine in 1981, where he also completed a residency in family practice and homeopathy. Traub served as president of the American Association of Naturopathic Physicians (AANP) Physician, 2001–2003. He is author of Essentials of Dermatologic Diagnosis and Integrative Therapeutics. A fellow of the American Board of Naturopathic Oncology, Traub has been actively engaged in clinical research throughout most of his career. He has served as medical director of Lokahi Health Center in Kailua Kona, Hawaii, for more than 3 decades.

A Reduction of Antibiotic Usage in Children with Echinacea