A review of the updated edition of Alan Gaby, MD's signature reference

ND, FABNO
In the latest edition of his classic reference, Nutritional Medicine, Gaby has managed to summarize everything he knows about nutritional medicine (and probably a few things he has forgotten) and put it all into a logical order in book form. Having it in your library is like having a private hotline to Dr Gaby, being able to ask, “What would you do?” 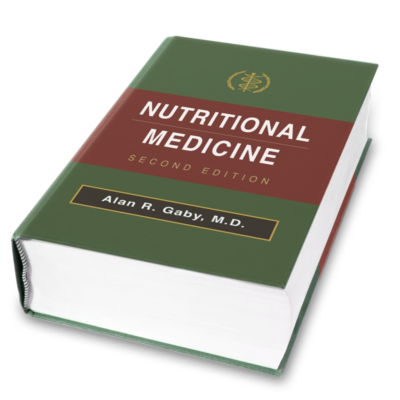 The newly revised, updated, and expanded second edition of Nutritional Medicine, by Alan Gaby, MD, is out.

If you already own the first edition, this is similar—just bigger and better. The second edition contains 1,700 new references. About 10 percent is new material and 90 percent was retained from the first edition.

If you haven’t already seen a copy of the first edition, the first thing you need to know is that this is a big book. My copy weighs in at 3.555 kilograms (7 lb, 13.4 oz for the metrically challenged). This isn’t a book that you are going to read on the bus, or in bed. You aren’t even going to sit with it on your lap in your favorite armchair. It is too heavy. Think about dedicating a desk or tabletop to it. You are going to want to keep it out to consult during your work day.

It makes sense that it’s such a sizeable tome. Gaby has managed to summarize everything he knows about nutritional medicine (and probably a few things he has forgotten) and put it all into a logical order in book form. My new routine is to try to read through the pertinent section before a patient comes in. Doing so is like having a private hotline to Dr Gaby, being able to ask, “What would you do?”

The book is divided into 26 sections. After basic introductions to nutritional medicine, Gaby reviews a long list of therapeutic agents and follows this with 21 chapters covering categories of diseases, the various “-ologies” from cardiology to rheumatology. Each of these chapters is divided into sections on specific diseases. In the end, more than 400 specific diseases are covered.

Reading this book and noting how carefully every idea is referenced reminds me of how much modern naturopathic medicine owes to Gaby. So many of us have admired his writing style and attempted to emulate his evidence-based practice for so long that we now take it for granted. It is easy to forget that there was a time when medicine followed protocols based only on case reports, or seeming divination.

Gaby’s book is comprehensive, but it does not cover everything an integrative practitioner may need to know. It is about nutritional supplementation and not in the traditional sense that focused on correcting deficiencies. It focuses on situations in which supra-physiologic doses of nutrients may help control a disease.

The Meaning of “Nutritional Medicine”

Perhaps we should explain what Gaby means by the term nutritional medicine, and why he titled his book after it. He writes, “In 1973, shortly after graduating from college, I became interested in the possibility that dietary modifications, nutritional supplements and other ‘natural’ remedies could be used as the basis for an approach to medical care that would be safer, less expensive and sometimes more effective than the usual drugs-and-surgery approach.”

He credits Linus Pauling, Roger Williams, Abram Hoffer, and Adele Davis with starting him on this path. His book is a modern take on old school orthomolecular medicine.

As a result, Gaby’s book shows little interest in correcting deficiency diseases. There is no index listing for beriberi, pellagra, rickets, or scurvy. Herbal medicine—and even the concentrated botanical extracts that many of us consider to be “almost drugs”—are only occasionally mentioned. Ginkgo and ginger are covered, but milk thistle isn’t. Curcumin is mentioned only three times in the book (related to familial adenomatous polyps, proctitis, and ulcerative colitis).

Homeopathy, as we all might predict, is not mentioned. If this book is reflective of Gaby’s practice, suffice to say he practices with a narrow pharmacy. Be that as it may, he does a good job with what he has.

What’s Missing From This Book

Cancer receives only minor attention in the book, less than 2 dozen pages hidden away in the chapter “Miscellaneous Conditions.” The section on cancer follows the section on burns.

Though brief, the cancer section does review the data related to nutritional supplements admirably, reviewing the research in a concise, even-handed manner.

Still, the cancer information feels scant, and the list of supplements covered feels out of date. No mention of melatonin, berberine, or caloric restriction. In fact, there is no listing of caloric restriction or fasting for any condition in the entire index.

My younger colleagues might find surprising that any in-depth discussion of MTHFR polymorphisms is also absent. The only mention I found is under the forms of folate available as supplements. Granted, some doctors may think the clinical fascination with MTHFR is a passing fad, but whether it is or not, one would think it deserves more attention—at least as much as frostbite, which does have a section.

In contrast to the scant coverage of MTHFR, Gaby devotes what seems to be an inordinate amount of space and attention to Candidiasis, the “fungal (yeast) infection caused by Candida albicans or other Candida species.” A full section under the Fundamentals of Nutritional Medicine is devoted to Candidiasis Related Complex, and it is mentioned as a contributing or causative factor in the discussion sections of nearly 2 dozen different diseases and conditions, including anemia, chronic fatigue, Hashimoto’s, multiple sclerosis, premenstrual syndrome, schizophrenia, and systemic lupus.

For those too young to recall, there was a point in time when the alternative medical consensus was that Candida caused almost all illness.

The Sum of Decades of Experience

In a way you can view Nutritional Medicine as an historical record of the practice of alternative medicine over the past 4 decades. It is a record of the subjects that have attracted Gaby’s clinical and intellectual interest. We should see Gaby’s treatise as his own attempt to chronicle what he has learned during his years of practice, the sum accumulation of knowledge and experience.

This book isn’t a textbook produced by a team of editors. This is Gaby on his own, a medical doctor who came of age in the 1970s, who has always been an advocate for evidence-based medicine. This is Gaby summarizing the science on the conditions we have commonly seen, diagnosed, and treated in practice.

In this book, Gaby has created an opportunity for you to learn what he has learned, to hear him at his best and clearest, to explain the basic knowledge one needs to practice nutritional medicine. It is like having Gaby as a private tutor, an opportunity to preceptor with him, to be able to say, “Dr Gaby could you explain this to me, please?”

What could be more valuable to any practitioner?

Enteroimmunology: A Guide to Prevention and Treatment of Chronic Disease, by Charles Lewis, MD, MPH

How to Read a Paper: The Basics of Evidence-Based Medicine