ND, FABNO
Some of us get “the jitters” when we drink too much coffee, so we intuitively expect the relationship between coffee consumption and blood pressure to be positively linear. Results from a recent study say otherwise.

To determine the relationship between coffee and tea consumption and hypertension.

Data were collected from the Singapore Chinese Health Study, which is a population-based prospective cohort that recruited 63,257 Chinese participants, aged 45 to 74 years, who resided in Singapore from 1993 to 1998. Information on coffee and tea consumption and other lifestyle factors was collected at baseline. Self-reported physician-diagnosed hypertension was assessed during 2 follow-up interviews (1999-2004, 2006-2010).

Think of how this might translate into clinical practice: In speaking to a patient with mild hypertension who admits to drinking 1 cup of coffee each morning, your advice based on this study should be, 'Either stop drinking coffee or start drinking a whole lot more.'

The association between coffee intake and incidence of hypertension did not vary significantly between men and women (P<0.5 for all interactions). See Figure. 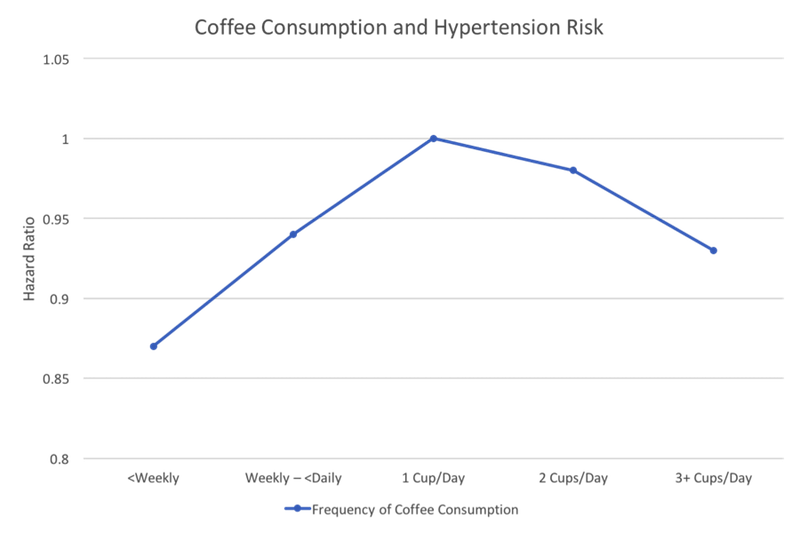 Participants who drank black tea daily had slightly increased risk (9%) compared to those who consumed black tea less than weekly (HR: 1.09; 95% CI:1.03-1.15). Similar results were observed for green tea (HR: 1.06; 95% CI: 1.00-1.11). However, these associations were not statistically significant when adjusted for caffeine content.

Participants who drank less than 1 cup of coffee per week or more than 2 cups of coffee per day had a significant reduction in risk of hypertension compared to those who drank 1 cup per day.

Think of how this might translate into clinical practice: In speaking to a patient with mild hypertension who admits to drinking 1 cup of coffee each morning, your advice based on this study should be, “Either stop drinking coffee or start drinking a whole lot more.”

As odd as this sounds, we should take these results seriously. They are consistent with conclusions from a 2011 dose–response meta-analysis of 5 cohort studies that also suggested an inverse U-shaped or J-shaped association between coffee and the risk of hypertension.1 In that meta-analysis, risk of hypertension increased with coffee consumption and peaked at 3 cups per day, but the risk decreased at higher levels of coffee consumption. These current Chei findings are also similar to several prospective studies that found a nonlinear association among cohorts of European men and women,2,3 US nurses,4 and other health professionals.5 Moderate coffee drinkers (1-3 cups/day) were found to have the highest risk of hypertension compared to light drinkers who drank less than 1 cup per day and heavy drinkers who drank more than 3 cups per day. A 2007 Dutch study reported a similar inverse J-shaped association in which hypertension risk was reduced for those who drank less than 1 cup of coffee per day and those who drank more than 3 cups per day compared to those who drank 1 to 3 cups per day.6 These current findings continue to confirm what at first glance is a peculiar phenomenon, the inverted U-shaped curve of dose response.

It comes as no surprise that caffeine raises blood pressure; it does so through “mechanisms that include sympathetic over-activation, antagonism of adenosine receptors, increasing norepinephrine release via direct effects on the adrenal medulla, direct renal effects, and activation of the renin–angiotensin system.”7 Yet coffee appears to have other attributes so that high doses attenuate the caffeine effect.

Coffee is a rich source of potassium, and 5 cups per day supplies about 26% of daily intake of potassium.8 Potassium promotes vascular smooth muscle relaxation and endothelium-dependent vasodilation, increases endothelial nitric oxide production, and has a blood pressure-lowering effect in animals and humans.9 Chlorogenic acid, a major polyphenol in coffee, may also account for the blood pressure-lowering action of coffee. Chlorogenic acid has been shown to reduce blood pressure and improve endothelial dysfunction in hypertensive rats10 and in mildly hypertensive humans.11

Thus what may be going on is that moderate doses of coffee, in the 1 to 2 cup per day range, raise risk of hypertension because of the influence of caffeine. At higher doses these other chemicals may counter the caffeine influence and lower blood pressure.

If coffee’s effect on blood pressure is actually dose-specific, this may explain the inconsistencies seen in other epidemiologic studies that looked for associations between coffee consumption and cardiovascular disease.12

By the way, although technically a cup of coffee is usually defined as 150 mL of liquid or about 5 fluid ounces, rather than the 8 ounces that normally constitute a cup, in this current study, a cup of coffee was defined as 237 mL, a nearly full 8-ounce cup.

U-shaped dose-response curves are being reported with greater frequency in the literature, and we must assume that this form of response is more common than originally understood. As a result it is likely that our dietary and nutritional recommendations may become more complex in the future as we realize that effects may change with changes in dose size. While more may not always be better, in the case of coffee it just might be.