The Journey Back to Feeling “Normal” After Chemotherapy

ND
Roughly two-thirds of women treated for ovarian cancer did not return to a sense of “normal” 18 months after treatment. This study looks at predictors and interventions for persistent symptoms and low quality of life.

The main objective is composed of 3 components: to document women who suffer from physical and emotional symptoms at the end of treatment; to determine the possibility of their returning to normal; and to identify those at risk of developing persistent symptoms or delayed recovery.

The OPAL study consisted of women (N=527), aged 18 to 79 years, diagnosed with invasive epithelial ovarian cancer who received 3 or more rounds of chemotherapy. All participants completed patient-reported outcome (PRO) questionnaires within 6 weeks of completing chemotherapy (n=527), and this served as their baseline measurement. Most of the women in this study (75%) had high-grade serous tumors that were stage 3 or 4.

The participants included women with a mean age of 60 years at initial diagnosis of ovarian cancer. Participant demographics included information regarding marital status, highest level of education attained, and evaluation of past medical history to determine history of premorbid conditions or previous cancer and any preexisting diagnosis of anxiety or depression.

A small percentage of the participants, roughly 25%, had at least 1 preexisting comorbidity, and 18% reported having a prior diagnosis of anxiety or depression. More than half (57%) of the women had clinical fatigue, and almost half (45%) had lower-than-normal scores for quality of life at baseline.

A total of 261 women were excluded from the study. Reasons for exclusion included starting treatment of recurrent disease and not completing 1 of the questionnaires at 1 of the time points of the study.

The 13-item Functional Assessment of Chronic Illness Therapy-Fatigue (FACIT-F) measured fatigue severity. Scoring for this assessment ranged from 0 to 52. (Scores below 36 have been used to define fatigue that correlates to cancer-related fatigue amongst survivors of breast cancer.)

Functional Assessment of Cancer Therapy-General (FACT-G) was used to assess quality of life; specifically, it assesses factors of functional, physical, emotional, and social well-being. A higher score correlates to higher quality of life. Quality of life was assessed based on norms of life compared to the Australian general population.

Researchers conducted outcome measures at 3-month intervals in the first year after participants received a diagnosis of ovarian cancer, and then less frequently with measurement yearly without the use of HADS, FACIT-F, and FACT-G scales.

The emotional well-being of the women involved in the study had a variation of score outcome by the end of treatment. At that time, 41% of women had low PRO scores. Only 42% of the participants had a return to a normal sense of emotional well-being by 6 months. By 18 months, at least 49% of the women still did not have a return to normalcy. Psychosocial determinants of health were persistent with decline in quality of life, with 35% of women reporting having at least 1 prolonged symptom. Using the time points of the study, prevalence of persistent symptoms in the entire study population were: insomnia, 19%; anxiety, 13%; fatigue, 19%; depression, 6%; and reduced quality of life, 26%.

Participants who were younger and those who had a history of anxiety or depression fared worse than others. Significant predictors of persistent symptom(s) were younger age (<50 years old; P=0.01), anxiety (P=0.02), and depression (P=0.004). Younger women were also more likely to experience a persistently poor sense of well-being (P=0.05), as were those women with a history of anxiety (P=0.04) or depression (P=0.007).

Overall, two-thirds of the women who underwent standard treatment for ovarian cancer did not return to a sense of “normal” 18 months post-treatment. This study shows that there are risk factors for persistent symptoms that health practitioners can triage before treatment begins, such as younger age and a history of depression or anxiety. Persistent symptoms and quality-of-life deficits are an ongoing challenge for many women treated for ovarian cancer.

This study also found that past medical history of a diagnosis of anxiety was associated with continued insomnia and reduced overall well-being, and failed responses to treatment led to an increase in prolonged fatigue. In ovarian cancer, quality-of-life issues result due to a complex combination involving surgery and chemotherapy, which may have an influence on the physical, social, and emotional well-being of patients.1 It is important to address this component with patients to be able to improve their outcome during and after treatment. Ineffectively addressing the psychosocial aspects of cancer compromises the patient’s health and treatment compliance and efficacy.2

Quality of life following the completion of treatment for the OPAL cohort was poorer than in the general population. The cohort had a good social well-being score, with roughly 7% scoring below the norm for the general population range. Positive health outcomes have been associated with high levels of social support, and several sources of literature support a positive association between the immune response and social support. A current study found that 5% of health practitioners treating women with gynecological cancer in Australia completed an assessment of their patients’ emotional and psychological health when providing service, possibly explaining the association of the development of persistent symptoms. A patient will benefit the most by being educated about treatment and learning how to improve their quality of life after receiving the diagnosis.

Ovarian cancer is the fifth leading cause of cancer deaths in women.3 By the time most women are diagnosed with ovarian cancer, they are usually at an advanced stage.4 A patient newly diagnosed with ovarian cancer may experience life-changing events that can increase stress and decrease quality of life. Women with ovarian cancer are at particular risk for depression and anxiety around the time of diagnosis due to the seriousness, and often the extent, of their disease.5 Studies have shown that distress can lead to greater overall problems in both physical and emotional well-being and a resultant decrease in quality of life.1 In addition, many women experience side effects during and after treatment. Symptoms, including fatigue, changes in sleep habits, and mental or emotional distress, can persist even after treatment is completed, further affecting long-term quality of life.4

Counseling appeared to be the most promising intervention strategy for addressing quality-of-life concerns for women with gynecological cancers.

The adverse effects of stress and distress (negative mood states such as anxiety, dysphoria, and anger) have been documented and proven to affect immune response in cancer patients.5 This decrease in immune cell response includes reduced natural kill (NK) cells and decreased activation of NK cells’ response to infected or cancerous cells. Impairment of NK cells may lead to the progression of ovarian cancer, delaying recovery and worsening prognosis. In the patients with progressed disease, further reductions in NK cell function were observed at the time of disease reappearance, suggesting the importance of NK cells in ovarian cancer.5

Another abnormal immune response that has been found to be altered in ovarian cancer is interleukin-6 (IL-6), which has been shown to promote proliferation in many cancer cells through various mechanisms.6 IL-6 is found in high amounts in those with ovarian cancer, both in ascitic fluid and peripheral serum, and in the past was suggested to be a biomarker for ovarian cancer prognosis.7 Other significant associations show that in women with ovarian cancer who reported more depressed moods, IL-6 was found to be elevated in peripheral serum, and women who reported a history of depression had higher IL-6 in the ascitic fluid.8

Associations between IL-6 and altered hypothalamic-pituitary-adrenal (HPA) axis and cortisol response have been noted in some studies, with elevated cortisol in newly diagnosed patients inadequate to suppress IL-6.9 In patients post-surgery to 6-month follow-up, cortisol and IL-6 were found to be lower, which is thought to be a result of the treatment.10 When considering patients who report a history of early-life adversity, a flatter cortisol curve has been noted for the first year post-diagnosis,11 and this was also seen in 5-plus-year ovarian cancer survivors who reported greater lifetime stress exposure or lower social attachment.12 Cortisol that is unregulated has associated symptoms of fatigue, decreased quality of life, and poorer survival rates for ovarian cancer patients with chronic anxiety a year post-diagnosis, placing patients at risk for more adverse outcomes.

In addition, emotional health, such as the presence of moods such as depression, anxiety, and sadness, can negatively affect daily activities.1 The prevalence of depression and anxiety in women with ovarian cancer occurs at a significantly higher rate than in the population of healthy women.1 This indicates the need for supportive care to improve these symptoms and long-term quality of life. Guidelines for Distress Management put forth by the National Comprehensive Cancer Network suggest patients should be evaluated at every visit and that these evaluations should be integrated into routine care.13

With the need to support ovarian cancer patients and help them manage underlying anxiety and depression after treatment, naturopathic and integrative practitioners can implement psychosocial interventions to provide care. Clinical evidence supports the effectiveness of mind-body therapies for improving anxiety, nausea and vomiting, pain, and sleep disturbances in cancer patients.14 Such interventions include counseling and cognitive behavioral therapy, which have yielded positive effects. Counseling appeared to be the most promising intervention strategy for addressing quality-of-life concerns for women with gynecological cancers.15 Recent studies have implicated the association between yoga and decreased serum cortisol levels, as well as its benefit in enhancing immune function, especially in healthier people.14

Outside of a medical setting, social media could be used as a community method to encourage support and communication. Analyses of sharing young adults’ cancer experiences on social media focus mostly on collecting data.16,17 But also, shown in a report by Jang et al, social, psychological, and emotional needs accounted for the majority of patient posts in an ovarian cancer online discussion forum.18

Social media can be used for sharing information and connecting to others. On Twitter, there is a monthly chat for those impacted by gynecologic cancer (#gyncsm)19 where survivors benefit from support in the process of healing and overall emotional support. For several reasons, social media may not be the most appropriate support system; however, in the time of the 2020–2021 pandemic, in-person connections may be difficult.

Princess Burnett, ND is a graduate from the naturopathic program at National University of Health Sciences in Lombard, Illinois. She is currently completing a degree in acupuncture at NUHS as well and is expected to graduate in 2022. 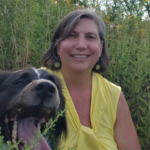 Dying of a Broken Heart?