ND
For this prospective, cohort study, 507 menstrual cycles of 259 eumenorrheic women without a self-reported history of infertility, polycystic ovarian syndrome (PCOS), or other endocrine disorders were tracked over 1 to 2 menstrual cycles. The wide-ranging results support the theory that PCOS can be redefined as polycystic ovary spectrum, with even healthy menstruating women experiencing occasional hormonal dysfunction.

Between 2005 and 2007, 259 eumenorrheic women without a self-reported history of infertility, polycystic ovarian syndrome (PCOS), or other endocrine disorders (including diabetes, Cushing’s syndrome, or conditions affecting the thyroid, adrenals, or hypothalamus) were tracked over 1 to 2 menstrual cycles. Researchers required that participants discontinue all hormonal medications (including Depo-Provera, Norplant, and intrauterine devices) for 12 months prior to the study. Participants were also required to discontinue oral contraceptives or other hormone supplements 3 months prior to enrollment.
The participants provided health and lifestyle information, including assessment of hair growth and history of acne as well as physical assessment including weight, height, and body composition.
In all, 509 total cycles were monitored, with timing of menstrual cycle phase assisted by fertility monitors. The women provided blood samples up to 8 times per menstrual cycle and all of them provided at least 5 samples per cycle. These samples corresponded to early menstruation, midfollicular phase, 3 samples periovulation, and samples in early, mid-, and late luteal phases. All samples were collected in the morning after fasting.
Serum measurement of estradiol, progesterone, insulin, sex hormone–binding globulin, leutinizing hormone (LH), follicule-stimulating hormone (FSH), albumin, glucose, blood lipids, antimüllerian hormone (AMH), and total testosterone (T) were measured. Sporadic anovulatory cycles were defined as having an observed progesterone peak less than or equal to 5 ng/mL and having no detectable serum LH peak on the later cycle measurements.

Participants were overall healthy, young women (age 18-44 years). Testosterone (T) concentration and age were inversely related. The lowest T quartile had a mean age of 32.7 ± 8.0 years compared with 23.6 ± 6.1 years in the highest quartile (P<0.001). History of having acne treated by a physician or with the use of medication was significantly lower in the lowest T concentration quartile compared with the 3 higher, but hirsutism was not different across quartiles among these healthy women.
Total T concentrations throughout the cycle ranged from 3.0 to 135.6 ng/dL overall and from 6.8 to 79.2 ng/dL at baseline (during menses). T concentrations increased to their highest around ovulation.
Compared with ovulatory cycles (n=467), sporadic anovulatory cycles (n= 42) had marginally higher total T and significantly higher free T (mean 23.7 ng/dL [95% confidence interval (CI): 21.4-26.3] vs 21.6 ng/dL [95% CI: 20.9-22.3], P=0.08, and 0.36 ng/dL [95% CI: 0.33-0.40] vs 0.32 ng/dL [95% CI: 0.31-0.33], P=0.02, respectively) during menses and throughout the luteal phase (P<0.01 for all participants). Women with higher T had elevated AMH concentrations and increased reporting of history of acne requiring medical treatment but not increased hirsutism. The percentage of anovulatory cycles was significantly higher across quartiles of increasing total T. Also, the LH-to-FSH ratio and AMH were higher across quartiles of increasing total T, independent of age. Notably, AMH in the highest T quartile was approximately double that observed in the lowest quartile.

Diagnostic criteria for PCOS as defined by the American College of Gynecologists and Obstetricians in 20031 include chronic anovulation and hyperandrogenism as defined by hormone measurements or clinical findings like acne and hirsutism. About 4% to 6% of women fit these diagnostic criteria, and these women are at a higher risk of pregnancy loss in the first trimester, pregnancy complications, insulin resistance, and obesity.
This study is significant for the naturopathic clinical approach to menstrual imbalance and PCOS as the results demonstrate that the pattern of hormone imbalance seen in PCOS can be observed in women who would not meet the criteria for diagnosis. This finding suggests that the functional changes that exist in PCOS exist not as a discrete, black-and-white imbalance but rather on a scale consisting of shades of gray, creating a need for a designation of “pre-PCOS” or “subclinical PCOS.”

As expected, higher T levels were observed in younger study subjects. Additionally, it is nothing new to note that higher T levels correlate with a higher incidence of acne in women. While hirsutism has also been associated with higher serum T, that was not seen in this study, suggesting that the level of T needed to impact hair growth exceeds the level observed to effect menstrual patterns in women, and eumenorrheic women may not have an imbalance severe enough to observe this clinical symptom of PCOS.
AMH is a hormone produced by primordial follicles as they develop within the ovary. It is has previously been reported that higher AMH levels can be observed in women with PCOS, as there are more follicles in development (thus the term polycystic) during the follicular phase.2 Interestingly, this higher AMH level was observed in this study in healthy women without menstrual irregularity but with elevated T compared to other healthy cohorts. Sporadic anovulatory cycles and an increased LH-to-FSH ratio were also observed with greater frequency in the healthy subjects with higher T levels. Both of these findings suggest that the hyperandrogenicity seen in women with PCOS can exist, perhaps to a lesser extent, in healthy women with only occasional menstrual irregularity.
This finding has significant practice implications, as it may alter a practitioner’s approach to treatment of women with occasional hormone imbalance who do not meet the traditional diagnostic criteria for PCOS. It appears from this study that polycystic ovary syndrome is in fact a polycystic ovary spectrum, wherein a pattern of hormonal balance exists across a scale of severity, with the most distal endpoint being anovulation, hirsutism and acne, insulin resistance, and other hallmark criteria of diagnosable PCOS. This could expand treatment options for these eumenorrheic women whether for their acne, infertility, or menstrual imbalances to include nutrients traditionally recommended for women with PCOS, including N-acetyl cysteine and inositol.
Interestingly, the samples collected that were evaluated in 2012 for T and AMH for the sake of this study were previously analyzed in 2007 for other hormones, and several papers were published based on those findings. This previous analysis was referred to as the BioCycle study. Findings included a lack of difference in cholesterol levels among women with sporadic anovulatory cycles3 and lower estradiol, progesterone, and LH peak levels in women with sporadic anovulation compared to healthy cohorts.4 Additionally, metabolic markers have been studied. Leptin levels have been found to be moderately inversely associated with sporadic anovulation.5 Studies continue to be published from the wealth of data collected in this study.
All in all, these findings suggest a possible underlying cause of occasional anovulation, such as a longer-term, even subclinical follicular, ovarian, hypothalamic, or pituitary dysfunction, even in otherwise healthy, menstruating women.
This article was a part of the August 2014 special Natural Medicine Journal issue on endocrinology. To see the rest of the special issue, click here. 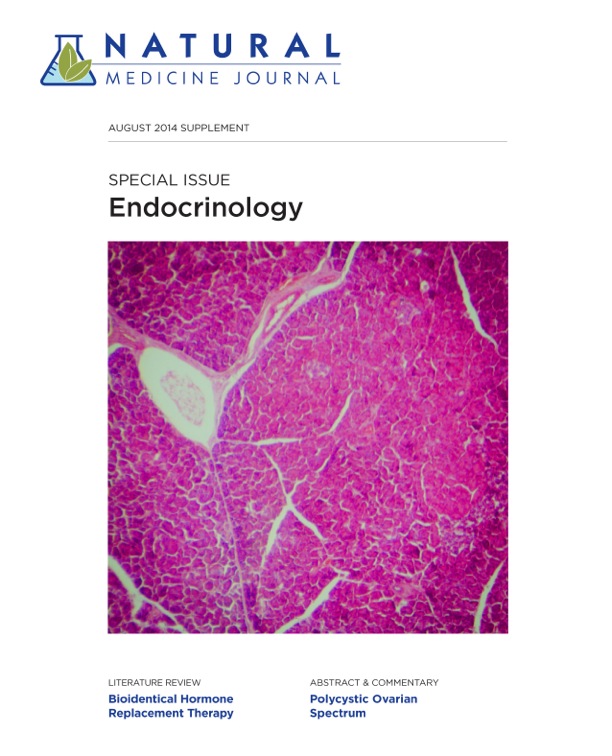 Jaclyn Chasse-Smeaton, ND, is vice president of scientific & regulatory affairs at Emerson Ecologics and Wellevate and a practicing naturopathic physician specializing in reproductive health and infertility. She also holds an adjunct faculty position at Bastyr University. Chasse is a graduate of Bastyr and has an undergraduate degree in biochemistry and molecular biology. She has coauthored several scientific journal articles in the field of medical biophysics and integrative medicine and has been involved throughout her career in improving healthcare access and education. Chasse is past-president of the American Association of Naturopathic Physicians and the New Hampshire Association of Naturopathic Doctors.