A Multistrain Probiotic May Provide Immune Support in the Elderly

Results from a double-blind, placebo-controlled study

Initial results seem promising, but study flaws, such as small sample size and failure to report baseline measurements, call into question their validity.

This article is part of our October 2022 Immune Health special issue. Download the full issue here.

Fifty healthy elderly subjects, aged between 60 to 80 years and vaccinated for influenza, were assigned randomly to probiotics (n=25, with 17 female) or placebo (n=25, with 19 female) groups.

Both groups mixed their study material in nonsparkling water and consumed it away from meals.

This study was financed by Lombardy Region POR FESR 2014-2020 in support of the development of advancements.

Research interest in human aging, including caring for older generations with waning immune health, continues to be an important area of clinical research, especially in the wake of the pandemic. The urgency surrounding how we can better protect our most vulnerable populations, including our elderly, is of interest worldwide. Research focusing on immunosenescence, or the way the aging immune system changes throughout the lifespan, has become a growing field in search of ways to support the aging process and potentially improve one’s later years.

An aspect of this research necessarily involves looking at the role the gut microbiome plays in the human immune response. It is well-known that the gut microbiota plays important roles in the response to disease,1 and that role may be impacted in advanced years,2 but what is less understood in the elderly population is how lifestyle factors such as diet,3 exercise,4 and other interventions, including the use of probiotic supplements,5 may support or augment the immune response.

To safeguard the elderly from common infectious diseases, vaccination is the standard of care. Annual vaccination for influenza and schedules for other infectious diseases are used in clinical practice to protect this population from severe illness.6 The reality, however, is that vaccines are less effective in the elderly, a phenomenon highlighted by immunologic responses to the Covid-19 vaccines.7 Healthcare providers historically have used, with limited success, higher-dose vaccines, alternate versions of vaccines, booster shots, or vaccines that include adjuvants in an effort to provoke a robust immune response in the aging.8

Taking this into account, we are compelled to look at lifestyle factors that may offset some of the common infection symptoms that occur in the elderly. This study focused on exploring a population that was vaccinated against influenza; it then aimed to investigate whether a probiotic mixture could reduce common infectious disease symptoms.

Despite the compelling subject matter, this study was challenged in a few areas. The sample size was relatively small, with only 50 individuals total. Additionally, researchers did not assess (or did not report) baseline symptom scores. It appears they did not ask study participants if, on day 0 of the study, or during the 2 weeks before the study began, they had experienced any of the defined common infectious disease symptoms (respiratory symptoms included cold, cough, sneezing, sore/itchy throat, nasal obstruction, with or without fever; gastrointestinal symptoms included vomiting, diarrhea, abdominal pain; musculoskeletal symptoms included tension headaches, pain, weakness, stiffness, joint noises, decreased range of motion). Given the small sample size, the researchers may have been able to make a stronger argument for the efficacy of their intervention had they demonstrated a decrease in symptom scores over time in the intervention group and stability of scores in the placebo group.

Furthermore, musculoskeletal symptoms accounted for a large proportion of the symptoms reported in the placebo group. These symptoms are highly nonspecific for infection; for example, a study of influenza vaccine effectiveness defined influenza-like illness as “respiratory illness with sore throat, cough, sputum production, wheezing, or difficulty breathing, concurrent with one or more of the following: temperature above 37.2°C, chills, tiredness, headaches, or myalgia."9 In this elderly cohort, many of these musculoskeletal symptoms are likely attributable to chronic osteoarthritis and deconditioning associated with aging and, thus, may have been present at baseline. In a small study such as this, random allocation of a small number of participants who are more symptomatic at baseline could easily account for the positive findings.

The rate at which participants in the placebo group reported symptoms was quite high: 76% reported common infectious disease symptoms over the 8 weeks of the trial. For comparison, the influenza vaccine study cited above found that 23.7% of participants had a protocol-defined influenza-like illness and 51.4% had a respiratory illness over an approximately 6-month period. This further suggests that the symptoms collected were overly vague and that the placebo group may have included individuals more prone to reporting symptoms or who were more symptomatic at baseline.

Research focusing on immunosenescence, or the way the aging immune system changes throughout the lifespan, has become a growing field in search of ways to support the aging process and potentially improve one’s later years.

Perhaps the most interesting element, particularly because this study is examining common infection symptoms as they may relate to influenza and common infections, is the curious omission of fever as a common infection symptom. Fever would be one of the first things a clinician would look for in a patient with an acute infection, and its absence as a standalone “common infectious disease symptom” in this study is puzzling. The authors may have included fever on their symptom checklist, but that is not clear from the article as written because the precise symptom checklist as seen by participants is not included in the text or in supplemental material.

Lastly, use of an objective assessment, such as respiratory viral PCR, to confirm that symptoms were due to infection would have markedly strengthened this study and would have likely been less costly than the laboratory parameters that were reported.

The authors report no change in salivary IgA concentrations with the study treatment. Fecal beta-defensin 2 increased in the probiotic group compared to baseline, though it did not increase in the placebo group compared to baseline. The more important analysis would have been a direct comparison of these levels between the probiotic and placebo groups at baseline and then after the intervention. Based on the included figures, it appears that fecal beta-defensin 2 levels rose in both groups, but that the trend was statistically significant only in the probiotic group; this is an odd result to report. Unsurprisingly there were changes in the stool microbiome. It would be interesting to see whether stool microbiome changes predicted clinical symptoms, but given the size of the study, this analysis may be underpowered and does not appear to have been done.

Research on the connections between the gut microbiome, immunosenescence, vaccination, and common symptoms associated with infections is an emerging area. This study does seem to connect these areas, showing that there may be some effect, but initial findings will benefit from clarification through future research with larger study sizes and more rigorous definition of clinical events.

Furthermore, although this research alone may not convince a clinician to prescribe or recommend probiotic formulations, clinicians may counsel patients to incorporate prebiotics, such as high-fiber vegetables, fruits, and legumes, and probiotics, such as fermented or cultured foods, into their diet. This method offers an avenue in which a patient may create a gut environment friendly to microbiota and then inoculate that environment with common bacterial strains found naturally in fermented foods.

Lily holds a bachelor’s degree in biology and a master’s degree in education. She has worked as a naturalist, a biology educator and has dedicated much of her career to premium, mission-driven and health-focused work starting with Whole Foods Market in the mid-2000s, at various roles over a ten year period at Gaia Herbs, and most recently at Ōura. Lily has presented on topics including herbalism and herbal supplements, medicinal mushrooms, hemp and more in front of national audiences.

As a committed gardener of medicinal plants, Lily maintains an urban garden in the Chicago metropolitan area and also cultivates land in the forests and fields of the Michigan countryside. She grows many varieties of unusual, rare, and commonly used herbs annually, using what she grows to promote health throughout the year.

Lily has been a runner for over twenty years and is passionate about movement, mindfulness, seeds and seed saving, gardening anywhere, hiking, yoga and advocating for people to spend more time in nature. Lily can also be found in her kitchen developing nutrient dense recipes for food, ferments, herbal teas, oils and more that she makes and shares with family and friends. 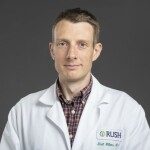 Brett Williams, MD, is an associate professor in the Department of Internal Medicine, Division of Infectious Diseases, at Rush Medical College in Chicago, IL. He also chairs both the Biohazard Committee and the Dual Use Research of Concern Committee. Williams earned his medical degree from University of Toledo College of Medicine before completing his internal medicine residency at Beth Israel Deaconess Medical Center in Boston and his infectious disease fellowship at Rush University Medical Center. Williams’s research focuses on the role gut microbiota play in the chronic immune activation seen in HIV infected individuals.

Benefits of Elderberry for Symptoms of Common Cold in Air Travelers